THE WINTER GAMES GO ON 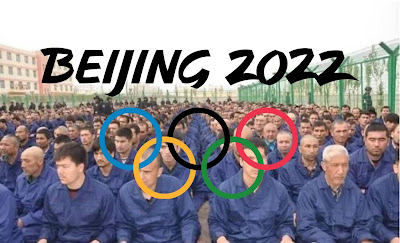 Although detainees must sleep in cramped cells on cement floors,
and though they must wear shackles with their numbered uniforms,
and though repression crosses Xinjiang’s pale locked-down sky,
the corporate industrial complex won’t bat an eye.
Although Hong Kong was once a base of civil liberties,
and though the communists crush those who want democracy,
and though the people now are jailed, practicing free speech,
the corporate industrial complex won’t say a thing.
So now in Beijing, the Olympic Winter Games go on,
supported by Proctor & Gamble, Visa and Bridgestone,
Intel, Allianz, Coca Cola, and Airbnb…
The IOC states it will be still aired by NBC.
Rudi E. Welec, “Abs,” is an irregular pseudonym for a NewVerse News regular.